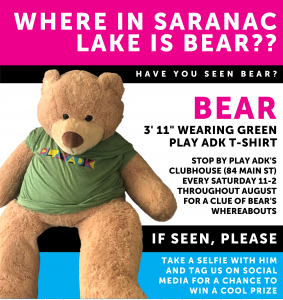 Throughout the month of August, residents and visitors are urged to keep an eye out for Bear, a large stuffed bear wearing a green Play ADK T-shirt. He is approximately 4 feet tall and is unlikely to respond to any name due to a rare bear hearing condition known as “stuffalitis.”

“He’s a super friendly bear so there’s no need to contact DEC or anything like that,” said Rob Carr, Play ADK’s executive director. “He doesn’t eat garbage, but he does enjoy a good latte.”

“I know we’re told not to approach bears, but I’ve met Bear and he’s a real sweetheart — not much of a talker, though,” said Mayor Jimmy Williams, “He just loves getting out and exploring downtown Saranac Lake.”

Clues for Bear’s whereabouts can be obtained from 11 a.m. to 2 p.m. at Play ADK’s Main Street Clubhouse on the following Saturdays: Aug. 6, Aug. 13, Aug. 20, Aug. 27 and Sept. 3. Bear may also be spotted anywhere within the village of Saranac Lake Sunday through Friday.

“If you see him, please post a selfie with him on social media and tag us @play.adk on Instagram and Play ADK on Facebook,” said Kaet O’Brien, Playmaker at Play ADK, “We know this sounds silly, but it’s the best way we can think of to keep track of him.”

To encourage folks  participate in this tracking method, Play ADK has put together a raffle prize consisting of goodies from local businesses. The raffle winner will be announced at Northern Current, a free community music festival held at Riverside Park in Saranac Lake on Sunday, Sept. 4.

Play ADK is a nonprofit working to build the first children’s museum in the Adirondacks. If you’re interested in supporting Play ADK with a charitable gift, or want to learn more, visit playadk.org or contact Executive Director Rob Carr at robcarr@playadk.org or (518) 304-7440.